Skip to the content
0
Cart
$0.00
Home » information About The Breed

British Shorthair cat breed information, a cat with a fabulous temperament and a popular breed of cat.

For many years, the British Shorthair has been named as the country’s most popular breed according to the Governing Council of the Cat Fancy (GCCF), and with his affectionate nature and teddy-bear good looks, it’s not hard to see why. As far as personality goes, the British Shorthair is one cool cat. They are one of the most placid breeds around and love nothing more than lazing around the house.

Pam Beard-Smith, breeder and chairman of the British Shorthair Cat Club, says: “They are the most laid-back cats; nothing fazes them and they do make really good pets. Generally they are good with toddlers and children, and I don’t have a problem selling them to families with young children because of their good natures.”

They are also very affectionate and loving, and will often curl up with you for a cuddle (on their terms of course) and become very attached to their owners. Sharon Chance of the Best of British Shorthair Cat Club says: “I always say that Shorthairs are ‘with you’ cats as opposed to ‘on you’ – if you sit down they will come to sit with you and follow you from room to room; they’re very dog-like.

“They’re intelligent cats as well, they can play catching games and my British Shorthair Olleke even sits on the vacuum while we’re cleaning! They have the most amazing temperament – you won’t see a grumpy Shorthair.”

British Shorthairs are perfectly happy to live as indoor cats, but Pam says they can enjoy going outside as well if they have the option: “They love to play, especially as kittens, and are very outgoing cats.”

One of the best things about this lovable, cuddly cat is that there are so many colour varieties to choose from, including cream, black, chocolate, cinnamon, lilac, blue (the best known colour), fawn, red, silver and many more. Breeders are also coming up with a huge variety of new colour-points, selfs/solids, tipped, ticked, tortie or tabby varieties. A breeder for over 20 years at Charmoden British Shorthairs, Sharon is one such breeder and around 15 years ago, started to look abroad at the colours being shown there. She says: “I was impressed with the new colours the breed came in, and decided to try and produce some of these other colours myself. “I imported my first two cats from Holland, two ticked-based selfs, followed by three from Russia in order to give me the cinnamon gene. The cinnamon cats really impress me, it is so different. Some people say it is a pale chocolate, but for me it is just an outstanding colour.”

The British Shorthair is one of Britain’s first pedigree cats – at least a hundred years old – and one of the most popular breeds in the UK.

These cats are said to link back to Britain’s ancient street cats, whose ancestors arrived with the Romans between the first and fourth century, and these then bred with wild native cats. Later, they were bred with Persian cats to improve the coat thickness. The breed standard was drawn up in 1871 and the development of a shorthair pedigree cat began. The breed has changed very little over the years and its popularity continues to grow.

British Shorthair cats have a chunky shape – cobby and well-muscled with a broad chest, strong shoulders and a straight back. They have short, strong legs and a tail that is rounded at the tip. The head is large and round on a short, thick neck, while the ears are small with rounded tips which are set well apart. Eyes are large, round and also well apart; their colour should be deep and pure – blue, copper, orange or green, depending on the coat colour. 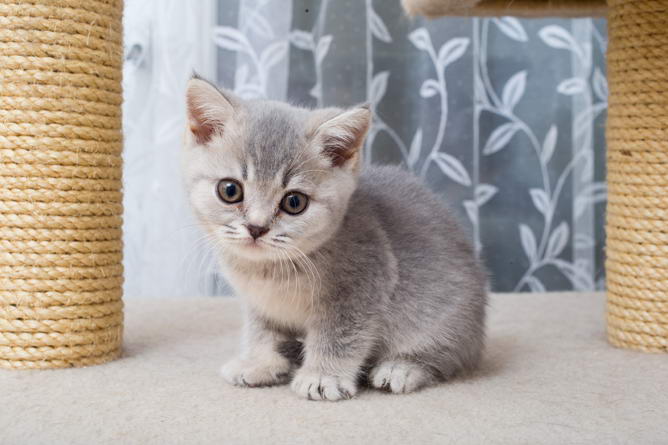 Although there’s plenty of choice, you may need to travel if you are after a specific colour or pattern. Prices for British Shorthair kittens may vary according to location, and some colours may be more expensive than others. The average price for a silver tabby is around £500 – £550 while the blues, chocolates, lilacs etc expect to go for around £400 – £500.

Pam advises people to do their research before buying a kitten and to not just buy the first one they come across: “A healthy kitten should be lively and playful, look well nourished and shouldn’t have runny eyes or dirty bottoms. A reputable breeder will also let you see the mother and maybe the father if he’s there.”

Be prepared to travel if you are looking for a specific colour and pattern. Look for a plump, friendly kitten with a square build, small ears, round eyes, short stocky limbs and a thick tail. At ten weeks old kittens may have lost some of their roundness and will be starting to look rangy. British Shorthair cats are also very slow to mature and reach their full beauty.

It seems the British Shorthair cat will suit all lifestyles, be it town life or as a country cat. What more could the modern cat owner with a busy lifestyle ask for? They make few demands, are healthy and hardy, and don’t require a lot of grooming. However if you are out all day, it is much kinder to have two so that they have company.

The breed is no more prone to illnesses than any other cat and all reputable breeders will ensure their cats are PKD negative. Pam says: “In the past, some lines were prone to Hypertrophic cardiomyopathy (HCM), but it’s not rife in the breed.”

As they are known for being well-built cats, Shorthairs can be prone to obesity, especially after they’ve been neutered, so give your cat plenty of exercise and maintain a controlled, balanced diet to keep the fat at bay. As far as grooming goes, Sharon adds: “British Shorthairs are a very low maintenance breed and a very hardy cat. Grooming your Shorthair is as simple as a good comb once a week, a quick ear wipe and you’re done.”

Remember! All breed profiles are general and every cat is an individual.

Living with a British Shorthair

“She’s the purriest cat I’ve ever met!” says Nikki of her six-month-old black-ticked British Shorthair Emerald, or Em for short. “We’ve got three Birmans because of their laid-back nature, and when we went to see a cat show seven years ago, our son saw a black-tipped British Shorthair and fell in love.

“We loved that the cats are so friendly, laid-back and contented little things, and they’re very intelligent as well.”

To keep Em company, Nikki bought a Maine Coon called Harry, also six months old, and the two are best of friends. She says: “Harry is double the size of Em but they get on so well and spend a lot of time together. They play in the cat run outside during the day and snuggle up together.”

Nikki says that Em is the leader of the two and she has been known to lead Harry into mischief, and that Em also likes to hide in difficult to reach places including behind cupboard units, but always comes out when the bell on her favourite toy is rung.

“I was surprised at how much she purrs when we pick her up, you’d expect it from a Birman but not so much from a British Shorthair; she’s very loving.”

Remember! All breed profiles are general and every cat is an individual.

It’s hard knowing what to do when you’re about to buy and adopt. But, we make this process even easier when you adopt with us, because we have answered the most frequently asked questions or concerns you and your family might have on introducing your newest pal to the family.